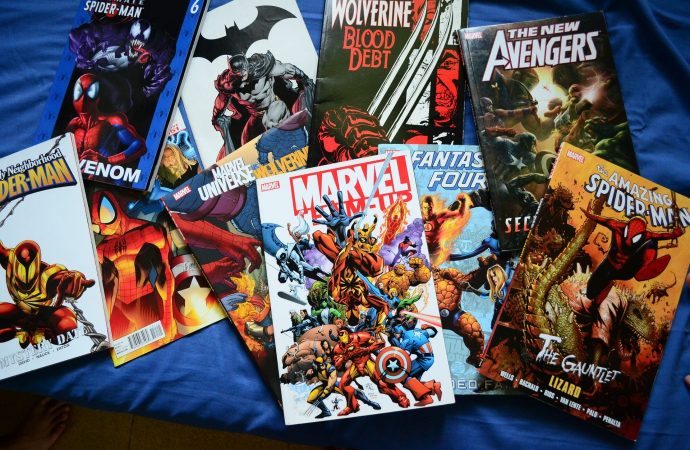 What is Marvel without Tony Stark? How do the X-Men look without the Wolverine? Unimaginable and horrible to many! The thought clicks the idea of selecting the least popular superhero costumes for this year’s Halloween party. Of course, a huge fan base contributes to the development of a Superhero! The world of comics has given

What is Marvel without Tony Stark? How do the X-Men look without the Wolverine? Unimaginable and horrible to many! The thought clicks the idea of selecting the least popular superhero costumes for this year’s Halloween party. Of course, a huge fan base contributes to the development of a Superhero! The world of comics has given us a league of heroes and villains in its long run. Successfully, many of these turned out as blockbusters of all time.

While ‘Demigod Thor’ took out millions with a single stroke of his hammer, the ‘Dynamite Thor’ remained in the shadows. One name for two heroes with unimaginable powers, and yet, both are incomparable for the fans.

Heroes who only lack fan following become a trick or treat in Hollywood! And so, not to scare but care about these iconic creations, select your Halloween costumes for the least popular superheroes in the industry!

Below is a list of the uncommon superheroes who deserved more recognition. Maybe you can spice up things and recreate their costumes for your Halloween 2022 party.

A Halloween costume is meant to chill down your spine, and The Dogwelder is a petrifying bet. This superhero is a part of the DC Comics who appeared first time in Hitman#118 in 1997. He belonged to the world when Suicide Squad had a team named ‘Section 8′ located in the Irish section of Gotham City. While Harley Quinn from earlier mentioned Suicide Squad is famous for her baseball bat, The Dogwelder with a welding machine has earned his title truly.

A guy famous for welding dogs to criminals’ faces sounds like the most horrific character for a Halloween party. The Dogwelder Halloween costume sounds spookier than it looks. Remind people of the disturbing way this maniac would trap and kill dogs inside alleys only to graft them on evildoers’ faces.

Adding to the enigma, he never showed his face or spoke. Sadly, the guy was sent to hell after he was killed. Recreate the idea and enter as ‘The Dogwelder back from Hell!’

Portraying a character on Halloween demands somewhat connection with death, fear, or hell. Here, the Kid Eternity Halloween costume depicts a kid who dies 75 years before the dedicated time of his death.

The character first appeared in Hit Comics#25, published by Quality Comics in 1942. Later, the publishers sold it to DC Comics, and gradually the character lost its value to different writers adding to his abilities, origins, and powers.

This boy reached heaven only to find that his death had been a mistake. For this reason, he is sent back to earth with an immortal life of 75 years for helping humankind. Now, the Halloween party cheat of this character is his superpower to summon any being by shouting, ‘Eternity!’

The superhero who will not remain least popular soon after the release of 2022 upcoming blockbuster film Black Adam starring “Dwayne Johnson – The Rock!”

The world’s highest-paid actor’s dramatic costume is one of all reasons for selecting Black Adam the rock Halloween costume. Theo Adam’s lenses and symbol on his costume can add to the spookiness of this year’s Halloween party.

He is one of the archenemies of the DC Superhero Captain Marvel. Originally, the enigma was a corrupted Egyptian predecessor of Captain Marvel who struggled his way to the modern era only to challenge his Marvel associates.

Of course, Deadgirl, by her name, is the best bet for this year’s Halloween party. She is a mutant character from Marvel Comics whose powers are activated only after she dies. The girl Moonbeam had dreams of becoming an actress. However, her lover murders her and activates her mutant power of reviving from the dead.

After revival, she joins hands with the team X-Force and later serves with X-Statix. Often, she is confused with zombies as she is less a human being. The Deadgirl Halloween costume looks petrifying with her zombie makeup and smoky eyes.

You can add to the fantasy of this festival by arranging a Doctor Strange Halloween costume beside her. It is because the girl was revived by none other than the sorcerer supreme Doctor Strange.

If you are planning the least popular superhero costumes in a duo, stick to the Cloak and Dagger Halloween costume. The pair of Marvel superheroes meet each other as teenage runaways in NYC.

Tyrone Powers and Tandy Bowen get kidnapped for testing a modern form of heroin. However, they respectively become Cloak and Dagger after being the only survivors.

The boy has the ability to engulf and teleport others in darkness while the girl fights using her knifelike shards of light. By arranging a black and white group Halloween costume, bang on and kill drug crime lords at the party!

Wanda Maximoff, the beautiful Scarlett Witch, makes an amazing choice for this year’s Halloween party. She is seen in the Marvel movies multiple times but deserves a lot more recognition. The reason for her character being less developed is the constant change of her backstory and parentage.

The talented Stan Lee created her character as she first appeared in The X-Men#4 in 1964. While the sorceress is known to have mutant powers of altering reality, she is also depicted as the mutant Magneto’s daughter.

You can look forward to the Scarlett Witch Halloween costume from Marvel Avengers. It is dark red and demon black in color, which sounds ideal to feel the haunt.

Cracked pumpkins intensify the spookiness of Halloween. Therefore, the Swamp Thing Halloween costume can be an iconic choice. This character by DC Comics first appeared in House of Secrets #92 in 1971. It depicts an elemental monster scary enough for this year’s Halloween party.

According to the comics, swamp things exist for the protection of the plant world. Therefore, you can wear this monster Halloween costume and form your ‘Cracked Pumpkin League’ for the party. Interestingly, the character has been given a second chance by CW for the 2022 Halloween season. You can look out for this costume as it successfully scared around 1.1 million viewers in the first week.

Often, he is confused between saving humanity and nature. However, his monstrous body is extremely strong, and he is capable enough to transform his body into different sizes and shapes.

Faith Herbert is among the lesser-known superheroines from the comic world. She was published by Valiant Comics. Her alter ego, Zephyr is a superheroine with the ability to fly. Also, she has some telekinetic powers and makes an ideal choice for a fantasy costume.

Her outfit is among the least popular superhero costumes because her character deserves a lot more recognition. She can be a cool choice for this year’s Halloween party if you are planning to portray the good cop.

The Faith Halloween costume depicts a plus-size heroine which makes it an ideal choice for many.

When Nighthawk comes into discussion, there are six different versions of the same name. However, the original Nighthawk, Kyle Richmond, has given the character wonders. Marvel’s supervillain is loosely based on Justice League Batman. However, he was unable to earn a huge fan base like Batman.

His outfit is the most stylish but least popular superhero costume. He was depicted in the final panel of The Avengers#69 in 1969. The Nighthawk is also an archenemy of Marvel Avenger Captain America, who outfights the villain.

The Nighthawk Halloween costume is maroon and blue. Both of the colors can add to the darkness and haunt on Halloween night.

Last but not least, The Dynamite Thor, also known as The Explosion Man. Weird Comics created him in 1951. Sadly, he was unable to earn a name like fans’ favorite God of Thunder, crown prince of Asgard, and son of Odin, Thor!

His superhuman ability is his immunity to explosives, which makes him The Explosive Superhero by powers. He is a bloodier superhero as compared to many supervillains and makes the perfect one for Halloween.

The Dynamite Thor Halloween costume includes an explosives belt that you will love. He used it to drop bombs every few feet and smoothly propel himself through the air.

These characters own the least popular superhero costumes you can copy for Halloween this year. Each of these superhuman villains and heroes deserves much more recognition. While some were lost to time, others are still struggling to find a name in the fantasy world.

Recreating their costumes and characters for Halloween 2022 can be the best bet. After all, it is high time for adding to the superhuman spookiness in your TRICK or TREAT!